She even made the BBC news. Tengai, the world’s first interview robot. Trained to avoid human prejudice. The goal is that she will eventually be so advanced that she can decide for herself whether a candidate can proceed to the next phase of the recruitment process, without a human being having to judge the transcripts of interviews. The world of recruitment seems to be the ultimate place for a revolution in social robotics. Does Tengai take the lead? Tengai’s first real interview with a candidate is already a fact!

Furhat Robotics, a company in the field of artificial intelligence (AI) and social robotics, invented Tengai. For the past four years, the company has been working on a human computer interface that mimics our way of speaking and our subtle facial expressions. The idea, says lead scientist Gabriel Skantze, is that “it feels much less scary or strange compared to a more traditional robot”. And even if you see the video accompanying this article, you understand the slogan of Furhat Robotics: ‘Join us in creating a world where technology is more human’.

Furhat Robotics has partnered with TNG to unleash the revolution in the recruitment industry. TNG, one of Sweden’s largest and progressive recruitment agencies, has embraced Tengai. TNG’s goal with Tengai is to offer candidates job interviews that are free from the unconscious prejudices that managers and recruiters can often bring into the recruitment process. And at the same time to make the experience seem humane for the candidate. Elin Öberg Mårtenzon, Chief Innovation Officer at TNG, hopes that Tengai will standardize the interviews. “If, for example, I ask you a question at the beginning of the interview such as ‘Do you play golf?’ and your answer is ‘Yes, I love to play golf’, and I play golf too, then I will somehow assess it positively,” says Elin Öberg Mårtenzon. “Tengai, on the other hand, is not involved in pre-interview chit-chat and asks all questions in the same way, in the same tone and in the same order. This offers the opportunity for a more honest and objective interview.”

The BBC also mentions in its article that Sweden seems to be a very interesting test area for A.I. recruitment. In addition to being a small country with a reputation for early adoption when it comes to new technologies, ethnic diversity in the labour market is a particularly topical issue after the record immigration of recent years. Unemployment among native Swedes is around 4%, but for citizens born abroad the figure is more than 15%. Compare this with the United Kingdom, where 5% of citizens born abroad are unemployed. Recent research for TNG has shown that 73% of jobseekers in Sweden believe that they are discriminated against when applying for a job on the basis of their ethnicity, age, gender, sexual orientation, appearance, weight, health or disability.

TNG maintains a blog in which the developments of Tengai can be followed closely. On this blog it can be read that after months of development and testing, Tengai has recently conducted its first real interview. The Swedish municipality of Upplands-Bro is already progressive and uses A.I for the website to help visitors find the right information. For the vacancy ‘coordinator digitisation’, the local authorities soon knew that it wanted to use Tengai for an open-minded and unbiased recruitment and selection process. Friday the 14th of June the time had come! Tengai conducted her first job interview with a candidate at the TNG headquarters in Stockholm. The assignment is that TNG is working with Tengai on a qualitative pre-selection. Interview robot Tengai and robotics coach Sinisa Strbac explains how Tengai’s first job interview went: “Based on the positive feedback from the candidate, the first interview was successful. Everything went according to plan.”

Discover how technology can optimise your recruitment during the fifth edition of the Recruitment Tech Event on Thursday 21 November. The leading event on the recruitment technology of tomorrow, held in the Amsterdome in Amsterdam. With inspiring keynotes, in-depth (English) breakouts and innovative demos. This year the opening keynote will be held by Megan Marie Butler from CognitionX who will share the latest insights into how AI impacts the attraction and retention of talent. Futurist Richard van Hooijdonk will tell about a new business model for recruiters. And for the first time, TNG’s social interview robot Tengai will be presented in the Netherlands. Elin Öberg Mårtenzon will tell how they developed Tengai together with Furhat Robotics to fight against bias in interviews. Also, Maarten Lens-FitzGerald will tell the audience about why voice is the future. Sign up for the Recruitment Tech Event 2019 and receive a €100,- discount until 7 November with code TENGAI19!

The Wednesday evening before we are organizing a pre-event, especially for our international attendees, (keynote) speakers and recruitment tech friends working at agencies and corporates. We start the pre-event with a walking dinner and conclude with drinks afterwards. If you join the Recruitment Tech Event 2019, the pre-event is of course for free!

FIND OUT MORE ABOUT THE RECRUITMENT TECH EVENT

Textkernel announces strategic acquisition by Main Capital: “We hope to actively expand to the ASIA/Pacific region in 2022” 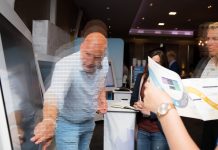 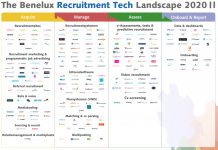