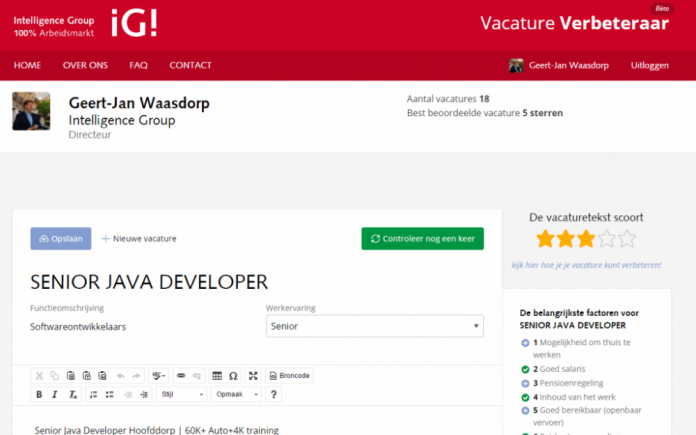 As of the 1st of September, VacatureVerbeteraar.nl will be fully integrated within the newly developed recruitment module of Textmetrics, a company specialised in text technology.

VacatureVerbeteraar.nl is now used by hundreds of recruiters in the Netherlands to recruit candidates. It is a product and algorithm of Intelligence Group and Jobdigger to write vacancy texts target groups. “The integration of the VacatureVerbeteraar within Textmetrics is a profit for both parties. Textmetrics is the most advanced in the international market for language technology,” says Geert-Jan Waasdorp, director of Intelligence Group.

“At the same time, we have highly specialized data and algorithms focused on target group motives, resulting in a strong proposition for both solutions. Writing vacancy texts is seen as one of the less fun parts of recruitment work. The integration of these two technologies makes it very easy to write an optimised and good vacancy text”.

Marcel Leeman, Director of Textmetrics: “With the integration of VacatureVerbeteraar.nl within Textmetrics, our clients can take important steps in the field of recruitment and a new generation of technologies for improving vacancy texts is emerging. Together with Intelligence Group and Jobdigger we have the ambition to offer both Dutch and international recruiters and employers a very simple and immediately usable product”.

In addition to the Dutch market, the focus in the coming years will also be on the Belgian, German, French and English markets. The developed recruitment module will go live in fourteen languages. The name VacatureVerbeteraar and the corresponding website will be visible via Textmetrics Recruitment, mentioning ‘Powered by Jobdigger and Intelligence Group’. Intelligence Group and Jobdigger are currently testing a number of new algorithms that should lead to even further automation of job posting.

Technology is making it increasingly easy to write texts for target groups. The starting point can be ‘gender’, by writing texts that are more focused on men or women (or gender-neutral). Texts can also be tailored to the level of education, level of knowledge of the Dutch language, positivity and Google indexing. By combining the text technology of Textmetrics with the data and technology of Intelligence Group and Jobdigger, vacancy texts are also screened for the right motives of candidates and the feasibility of recruitment. In the future, suggestions will also be made for alternative job titles and all the characteristics of ‘Google for Jobs’ will be tested. 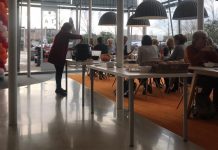 Randstad Italy opts for Job Posting with IGB: “Ensures a solid footprint and partnerships with the most important job boards in Italy”

Textkernel and TextUs partner to help staffing firms: “Enables recruiters to really scale their efforts in an efficient, yet engaging manner”

Hiretual raises $13 million in Series B financing: “Hiretual will be doubling its patented technology”