The most popular sourcing tools: “The productivity of the sourcer becomes sky-high!”

in News, Tools
Reading Time: 4min read
66
Share on LinkedInShare on FacebookShare on TwitterShare on WhatsappShare via email

The life of sourcers is made a lot easier with all the tools that are available. What are the most popular paid and free tools for sourcers? Recruitment Tech asked a hundred participants about their favourite tooling and the future of sourcing. Kim Lokenberg and Marcel van der Meer, experts in the field of sourcing, share their views on the results of the research. “The productivity of the sourcer becomes sky-high!” 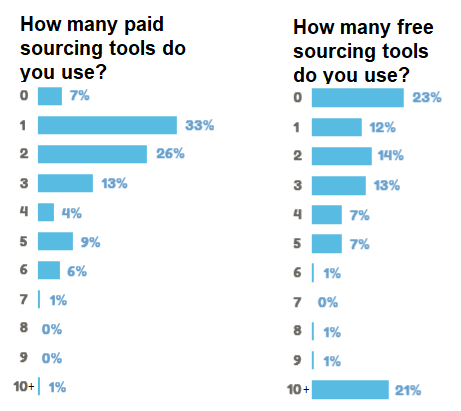 We asked the participants how many paid and free tools they use. More than half of the sourcers use one or two paid tools. The difference among the free sourcing tools is more striking: while 21% say they use ten or more tools, no less than 23% do not use free tools. Kim Lokenberg explains this. “People who do not use tools often do so out of unawareness or fear that they will end up in the ‘LinkedIn jail’. Don’t forget that many sourcers are actually searchers and only search on LinkedIn.” According to Marcel van der Meer, this is also due to the recruiters themselves. “I often see that recruiters don’t know about the free tools – especially chrome extensions – that exist.”

However, the use of the number of paid tools (on average one or two) is considerably lower than the free versions (on average four or five). “Employers often do not want to spend money on tools. Most paid sourcing tools are tools for contact details. Don’t forget that many sourcers still mainly use LinkedIn Recruiter as a sourcing tool, so they don’t use many other paid tools. Sourcing is changing, which also means that we will have to change our approach. I’m not saying that we need to invest more, but you can automate more and more things these days and that costs money,” says Kim Lokenberg. “Most sourcers, especially freelancers, prefer free tools because they often have to pay for them themselves. Paid tools are often considered expensive. But if you can save a lot of time as a result, then this business case is quickly made”, adds Marcel van der Meer. 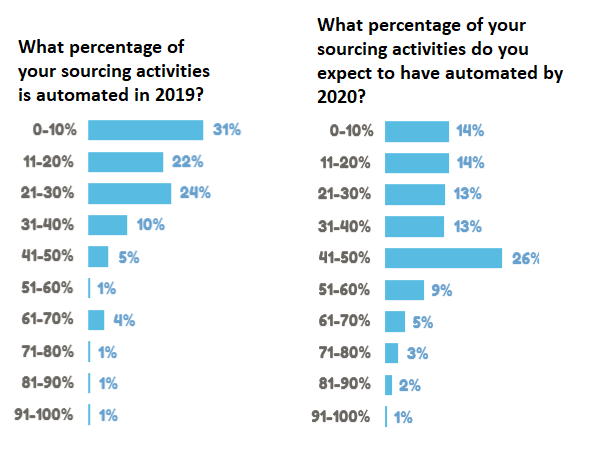 Most participants of this survey indicate that currently between 0 and 30% of their work is automated, while expectations for 2020 seem to be shifting towards 30 to 50%. A major shift in a year’s time. Marcel van der Meer: “I think this shift has been going on for some time now. Not that it goes directly from 0 to 50%. But it does mean that next year many organisations will pay attention to automation and that there will be a slight shift upwards”. Kim Lokenberg adds to that: “I think that 2020 will come too soon to have 50% automated. Because of the bad artificial intelligence, it is not yet possible to automate the search, for example,” says Kim Lokenberg. 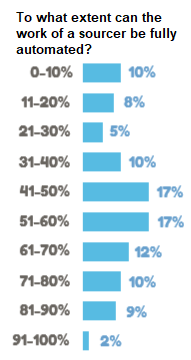 The participants in the study assume that about 50% of the work of sourcers can be automated. “I certainly agree. The development of tools is now going very fast. They are still separate solutions, but they are being connected to each other at a rapid pace. You can already largely automate the process of finding candidates. These tools are already often faster and sometimes better than a sourcer. I think that in the end, and many sourcers don’t thank me for this, 80-90% of the work can be automated. I don’t have a crystal ball, but by 2025 we will certainly be a long way off”, Marcel van der Meer predicts. Kim Lokenberg: “I find 50% on the low side. I myself see that eventually 70% of the process can be automated, provided that the tools improve. The sourcer gets more and more tasks. If you look at a few years ago: The sourcer found the potential candidate, where the sourcer now also does the first outreach. Automating part of the sourcing process will have the biggest advantage that the productivity of the sourcer will become sky-high. Sourcing has just started!”

Below you will find the most popular paid and free tools from the participants and tips from the experts. Soon we will publish the complete list of the most popular tools for sourcers on recruitmenttech.com. Make sure you don’t miss it (and other recruitment tech news by subscribing to our monthly newsletter)

The five most used free sourcing tools by participants:

The five most used paid sourcing tools of participants:

Tips from the experts:

Josh Bersin: ‘Tech vital to TA, but process should be human-centered’

Multiposting tools: Why they are crucial in your recruiting process

How sourcing and sourcing tools can boost your recruitment strategy

These are the most popular articles from 2019 on recruitment technology