Facebook goes Google for Jobs and posts vacancies: “This is going to be huge”

in News
Reading Time: 2min read
33
Share on LinkedInShare on FacebookShare on TwitterShare on WhatsappShare via email

Facebook is experimenting with a Google for Jobs-like system. Chad Sowash and Joel Cheesman came with this news in their recruitment podcast ‘The Chad & Cheese Podcast’. The big advantage for Facebook: they avoid complaints about competition distortion.

Facebook ‘scrapet’ jobs from career pages and automatically adds them to the organisation’s Facebook page. Organisations must indicate that the vacancies may not be transferred to Facebook. Because of the enormous amount of data Facebook has from its users, the medium can easily assess whether someone is looking for a job. In that case, the vacancies can be shown to the relevant users on Facebook. This should eventually also become the revenue model of Facebook Jobs, as soon as parties pay in the form of advertisements to have these vacancies shown. 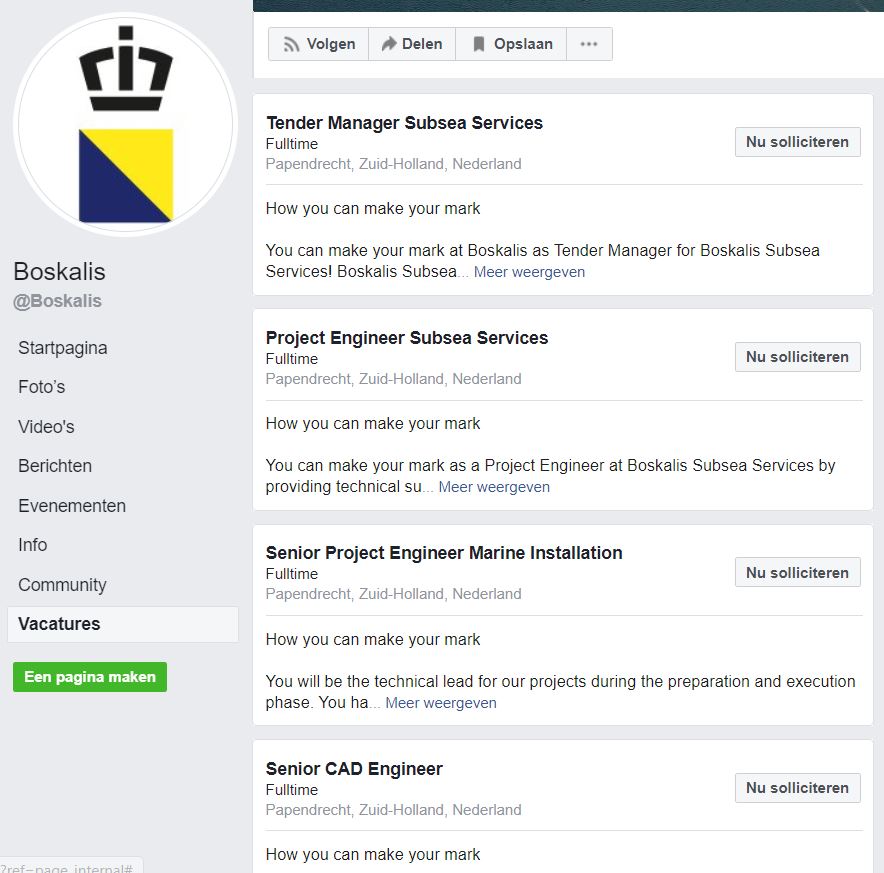 According to expert Bas van de Haterd, this is not only being tested in America, but also in the Netherlands at ABN Amro and Boskalis, among others (see screenshot of the Boskalis Facebook page). You can also see that it is still in beta, for example, reference articles and ‘the vision’ have been posted as vacancies at Boskalis.

“Facebook is doing what Google for Jobs would have wanted to do. The nice thing about this is that Facebook doesn’t have to worry about competition distortion, like Google for Jobs is seen by the job boards and they got problems with the European Commission. After all, no politician sees Facebook as a search engine, so they can do what they want in this area.”

“Facebook is going to do what Indeed did years ago: post vacancies. Nobody believed at the time that this had a chance of success, but now they are the place to go when you’re looking for a job. This can become really huge in the long run, as long as they do the execution better than in the previous attempts”, predicts Van de Haterd.

Below you can listen to the edition of ‘The Chad & Cheese Podcast’ about Facebook Jobs:

These are the 6 best tools to boost your onboarding

This was the hottest recruitment tech news of January: Acquisitions, News Breakers & more

Employ acquires talent acquisition suite Lever: ‘Our market-leading solutions are better than ever’

These are the most read articles on Recruitmenttech.com the first half of 2022

Video: these were the highlights of RecFest 2022

Josh Bersin: ‘Tech vital to TA, but process should be human-centered’

This was the hottest recruitment tech news of January: Acquisitions, News Breakers & more

This is how Walmart uses virtual reality to hire new managers